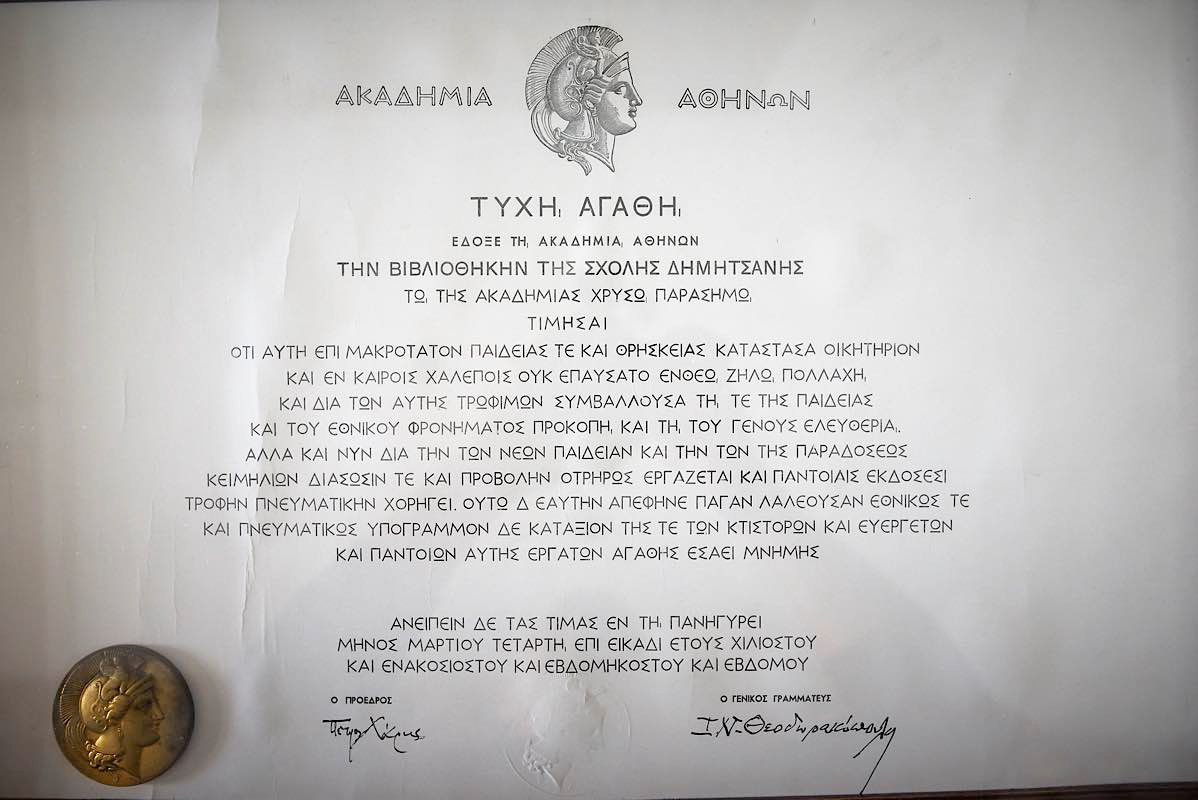 Dimitsana appears in history as an already shaped city in the year 967 AD and with the old Philosophou Monastery, the notorious School, the prominent Library and the manufacture of gunpowder is closely connected with the spiritual life of the Nation, especially during the long years of slavery and later during the Greek War of Independence.

The Philosophou Monastery erected on a remote rock above the right bank of the Lucius river, was the center of education, from which, during the years of slavery, a multitude of its boarders emerged, many of them took episcopal seats within Greece and elsewhere, some others became patriarchs of Constantinople, Jerusalem and Antioch or became teachers and founded schools. Deservedly this monastery, where the most known Krifo Scholio of the Nation during the Dark Ages operated there, that is, in the first century of slavery, was characterized as the school for the enslaved Nation, which constituted Church and Education.

The prominent Greek School was founded in Dimitsana in 1764 and so, the education center was moved from the Philosophou Monastery to Dimitsana. Ancient writers such as Aristotle and Platon were taught at the School Natural Sciences, Mathematics, Astronomy, Cosmography, Poetry, Rhetoric, Byzantine Literatur, etc., as we are informed by various manuscripts kept in the Library.

In this notorious School studied, among others, Androusis Iosif, Minister of Education of the Rebellious Nation, the hero of the Battle of Maniaki, Grigorios Dikaios Papaflessas, the Metropolitan of Tripoli, Danihl Panagiotopoulos, the Patriarch of Constantinople Grigorios E, who martyred for the sake of the nation, the Metropolitan Germanos III of Old Patras, who proclaimed the national uprising, and others who excelled in various parts of the hinterland, as founders of schools, as teachers, etc.

A necessary complement to the School and inseparably connected to it from the first moment of its operation was its Library. Manuscript codes of various contents, ancient authors, texts of the Holy Fathers, interpretive books, like dictionaries, anthologies, etc. printed books of old hard-to-find publications and archetypes, which after the discovery of typography constituted the wealth of the Library ab initio. On the eve of Palingenesis War, the Library, constantly enriched by the efforts of the teachers of the School and expatriates settled abroad, reached to have 5000 volumes of books. This spiritual wealth of the Library was used together with the gunpowder of Dimitsana for the needs of the Greek War according to the valid information of the Old Man of the Morea in his Memoirs, who writes "We had a shortage of gunpowder and paper and we settled in the Library of Dimitsana and other monasteries and prepared ammunition…" and his adjutant writes about it,  "in Dimitsana they took care to prepare ammunition and because they ran out of paper, they destroyed their valuable Library and church books to reach for all the troops of the Peloponnese"

After the revolution, the great Library of the famed Dimitsana School had only around 500 books. Since then, the Library, that has been operating continuously until today, has become "the spiritual treasury of the place, a real showcase of its history", the renowned Spiritual Institution of the area in triple form, ie as a Library with printed material old and new, as a Historical Archive with a collection of documents, manuscripts, patriarchal letters and as a Museum depicting the ancient Medieval and Modern Dimitsana. In the rooms of the Library are exhibited objects of the popular life of the area (household utensils, carpets, agricultural tools, loom) and are kept in a special brass shrine the bones of Germanos III Of Old Patras the saddle of the Papaflessa's horse and blades. The hall is also decorated with the portraits of: Michael Economos, historian and secretary of the Old Man of the Morea, the Benefactor Nikolaos Makris, Grogorios Maraslis, Mayor of Odissos, painting of the painter Roilos and others.

Today the Library in its form is operational and has a Lending Department and an Information Center. It welcomes scientists and researchers of all specialties and many Greeks and foreigners visit it all year round.

The Library is constantly enriched and today contains about 35000 volumes of old and new books, a collection of magazines, etc.

The publishing activity of the Library is extremely interesting.

The Library today is housed in a building which was built on the square of Agia Kyriaki and on the site of the School of Dimitsana in 1845 at the expense of the Great Benefactor of the place Nikolaos Makris and with blueprints by Professor Lyssandros Kavtatzoglou. It became a Public Service by the law in 1843.

The Academy of Athens, the first Spiritual Institution of the country, in the year 1977 sealed the historical and educational value of the Library with a gold medal "BECAUSE IT HAS BECΟME ΤΗΕ HAUSE OF EDUCATION AND RELIGION FOR MANY YEARS…""